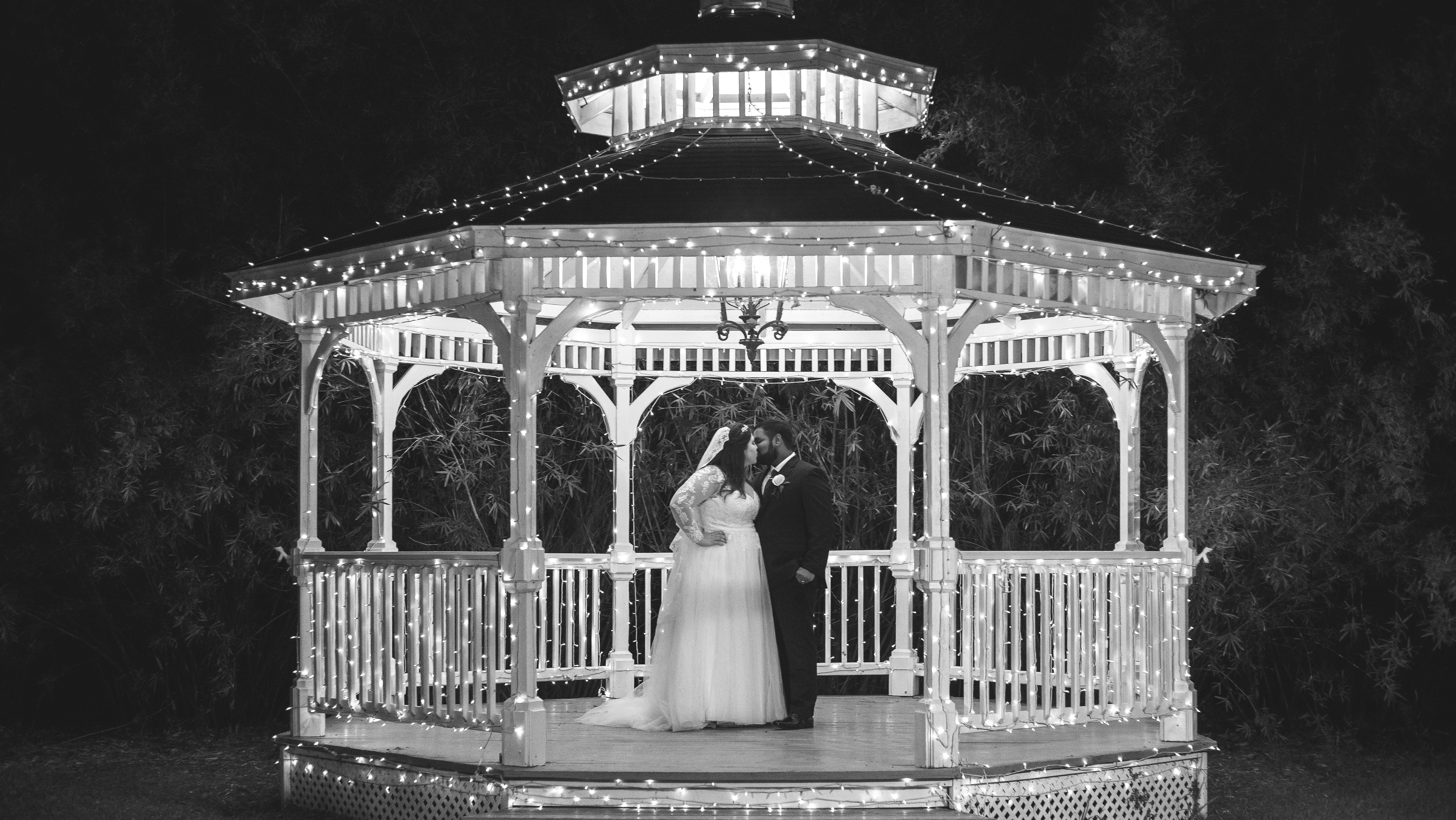 Before we get into the classy wine-colored wedding, let’s rewind just for a moment to the day Sam proposed. He had the whole night planned; both his and Victoria’s family were at one of their favorite steakhouses, and of course the families knew why they were there. After everyone sat down for dinner in the “party room” together, Sam told a little white lie to Victoria and said he had to go “grab his camera” out of the car. In that time, Rachel, the maid of honor was hiding out in the car with one of Sam’s friends. He brought the pair with him inside the restaurant with the ring safely in his pocket. Sam prepared some music and a Skype call, so Victoria’s other maid of honor could be there for the moment as well. After doing all of this planning and even writing a whole note of everything he wanted to say, he became nervous with the amount of people in the room. He started speaking a few things from his heart then popped the famous question. In Sam’s own words he said “She said YES right away, because she has been waiting for a while for this to happen lol”.

Taking photos of everyone getting ready for the big day was a breeze since the venue had the bride and groom’s room on top of one another. We even took the time to snap a photo of the couple together while still holding onto the tradition of the groom waiting to see his bride! Sam wore a dark suit with a wine colored tie and white shirt. Victoria’s dress had laced see-through sleeves and her modest train brushed the ground while she walked.

The ceremony was held outside of the Book Nook Inn next to the venue’s pond. Everything was beautiful; the bridesmaids wore wine colored dresses while the groomsmen wore matching tie and vests, and the unity candles were set up on the small dock on the water. During lighting of the candle, Victoria surprised Sam with a special pocket watch. After exchanging rings and vows, let’s just say the smitten couple gave me more than enough time to photograph their first kiss.

The sweetest speeches were given; even I couldn’t help but get a little choked up when one of the maid of honors mentioned passing her title as the “best” friend of the bride to the groom. My favorite part of the reception was the big group photo of all the guests; it’s always such a unique wedding photo because you can reflect and be reminded who all attended. 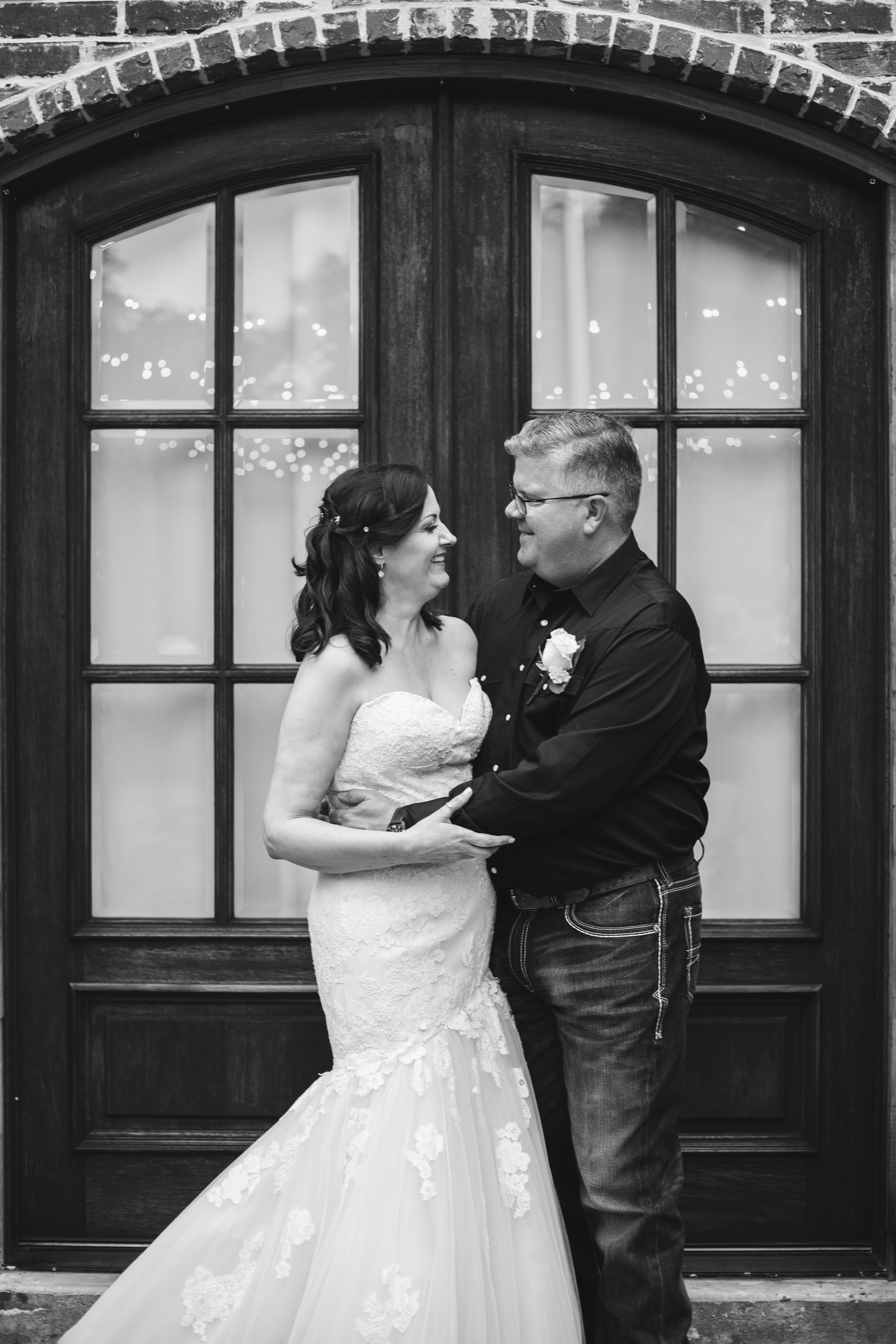 It was Friday, May 10th was full of drizzle across North Texas, Jim and Sandra had planned on an outside ceremony, so they decided to be wed inside the La Cour, which is an elegant and cozy brick venue in McKinney. Photo by photo, Skys the Limit Production documented the newlywed’s big day.

The ceremony was filled with smiles and beautiful moments; it was a charming burgundy and ivory wedding. The reception was held in the same room and there was an abundance of the couple’s favorite sweets for all to enjoy! As the night went on, the live band took guests back to the 1960s with songs like ……. Guests enjoyed tortillas with smokey fajita meat, and the bartender kept drinks flowing through the night. I could see why Mr. & Mrs. Sackett invited each of their wedding guests as I got to meet each person while taking their photos; they were a kind, light-hearted, and humorous group.

I loved this relaxing, beautiful wedding! If you’re getting married and looking for a McKinney wedding photographer, get in touch! Here are some of the photos from Sandra and Jim’s wedding day.

Like so many other things in life, falling in love and finding your soul mate isn’t something planned, it’s just something that happens unexpectedly. (Unless you REALLY like to plan) Just like many of us, Natalie and found each other in the big crazy world and plan on living through the journey that is together. The two were wed at the McKinney Town Center on November, 2018.

Natalie works in Pediatrics as a medical assistant and her husband is a Fire Alarm/Telecom Technician. Ciso decided to pop the question on Natalie’s Birthday. At the Reunion Tower in Downtown Dallas, friends gathered to celebrate. During the conclusion of the meal as they finished their dessert Ciso asked Natalie to marry him. She obviously said yes.

The wedding was magical, Natalie looked absolutely breathtaking as she walked down the aisle. looked sharp, standing underneath the bright crystal chandelier, eyes aglow. The ceremony was emotional as we looked back on pictures seeing the progression of their love. Talk about romantic! The reception was lively as ever. Guests and the newlyweds glided across the floor. Dance fever was contagious. and Natalie danced as if they were the only ones in the world. Because in that one intimate moment, they were.

Skys the Limit Production would like to thank you for choosing us for your photography! We wish you two nothing, but happiness!

On a warm evening of May 5th, a beautiful blushing Bride Courtney, married the man of her dreams, Adam. They proudly professed their love for one another at the gorgeous venue Rancho De Colores in College Station, Texas. Skys The Limit Production captured this momentous occasion with such precision and grace, the couple’s day will be a wonderful memory to pass down through the generations.

The couple both originated from Arkansas, being aquatinted from the tender age of 14. From there, Courtney became a morning reporter for KBTX in Bryan, Texas. Adam however, worked up to being a Senior Wealth Associate at Northern Trust in Houston, Texas. As life happened, the two began seeing more of one another, playing competitive golf and seeing each other throughout Facebook. One day, on their Winter break of freshman year, Adam couldn’t help but inquire about Courtney; messaging her the conversation which turned into one that would never end.

The first night of their summer vacation in 2017, Courtney and Adam went to Playa Del Carmen with a group of friends. Later on, Courtney was ushered to the beach for a “group picture” before they went to eat. It was to Courtney’s surprise and Adam’s meticulous planning that he proposed! Courtney flushed with joy saying, “It was so fun being surrounded by friends!”

The day of their wedding, Adam and Courtney exchanged letters, tenderly writing of their love. Courtney appeared in her dress, the carefully sew ruffles swayed gently as she made her way to the alter, her earrings shown in brilliance just like their love. Her smile was the crown she bestowed upon herself, this beautiful blushing bride, gleaming like a diamond. Adam, anxiously waiting for his bride, wore a warm navy suit with a delicate pink tie and his hair smoothed to dapper perfection. His eyes shone like the the ring he placed lovingly on her finger as he stood before God to make Courtney his wife. The crowd was in silent adoration as they witnessed the ceremony. The love and support was so palpable you couldn’t tell the difference of friend or family. The reception had a festive feel, paying homage to Cinco De Mayo. The crowd was buzzing with laughter and cheerful conversation, people dancing in rhythm with one another, and of course the infectious feeling of elation. The reception ended with the newly weds walking forth hand in hand through the sparking archway created by loved ones as they passed. The couple gleamed in such a way, it made the stars that night envious. Warm wishes and congratulations roared from the crowd as their car disappeared into the night.

I would like to personally thank Adam and Courtney for letting us be a part of this most wonderful occasion. It was such a beautiful wedding. Your love speaks legions. I wish you both nothing, but the best and many years of happiness.

Holding hands during the ceremony